J.P.S., a 24-year-old soldier came under rapid missile fire during the Kargil War’s Operation Vijay at the World’s highest battlefront. World’s highest battlefront THE KARGIL WAR VICTIM’S BRAVE FIGHT About 5 years ago when this brave young man, serving the Indian Army willingly went ahead literally where no man had been before to win back the crucial Point 4590, Tololing, Drass Sector of the Kargil’s 8 Mountain Division. J.P.S. sustained high velocity missile injuries when he was hit by a barrage of bullets fired from the AK-47 assault rifles of the enemy bang on the central aspects of his face while successfully attempting to gain the critical heights of the accompanying Point 3 Pimple on the 28th of June 1999. The blast rendered this brave man unconscious at the site with minimal support from his colleagues for 2 days while the delta Company of the 2nd Rajpuitana Rifles continued to battle it out for ultimate victory of Point 3 Pimple.
Yet unconscious, 48 hours and a treacherous journey later under direct enemy fire he was evacuated from the battlefield by a military copter serving up as an air ambulance to the 92 Base Hospital, Srinagar for further basic surgical care that included making a hole in his windpipe for emergency breathing. Up to a week under the most taxing of medical and surgical facilities he eventually regained some level of consciousness, and was partially stabilized such that he could be further relocated for tertiary care at the Army Hospital Research and Referral Center, New Delhi, through the Base Hospital Delhi.
At the Base and the Army Hospital, New Delhi he was under specialized Plastic Surgical care for his multiple war injuries with a highly gun powder contaminated wounds. Both his jawbones were wired together for stabilization of the multiple fractured fragments of his shattered face. The Pan Facial Trauma included an absolute Horizontal loss of middle one-third of the face. The anatomical structures lost were the skeleton and soft tissue of the cheek, nose, eyes, teeth and the upper jawbone. The corresponding functional loss amounted to his partial loss of vision in the right eye, difficulty in breathing, mastication, speech and swallowing. In view of the extensive nature of the injuries, J.P.S. was not suitable for major reconstructive surgery immediately and was eventually scheduled for the same once he was stable after a period of about eight months.
Following a prolonged stay in various hospitals, J.P.S. was allowed to go home for a brief period to his hometown in Lucknow. He was readmitted to the Army Hospital at New Delhi after 8 weeks, when he underwent flap surgery to cover the till yet completely exposed cheek and nose areas using the pedicled extra-corporeal radial artery forearm flap to reconstruct the inner as well as the outer aspects of his cheek and nose along with bone grafts from the right chest and cartilage grafts from both ears for lower nasal alar reconstruction. The flap tissue involved his hands being held in close proximity to his face for a period of 3 weeks for it to become a part of the raw area. This Flap pedicle was divided after 21 days and he could go back home after a stay of nearly 5 months. The second re-admission was for a reconstruction of cheek and eye floor right side. The bone graft was used from his right hip bone, but this had been lost due to an infective process and he had to be subsequently re-grafted using the bone graft, this time from the opposite hip bone. Unfortunately, this surgical effort to restore his form and function to his facial skeleton once again proved futile.
Bad times stay for long and nearly a year and quarter later the rib graft from his chest too had been resorbed leading to a nasal collapse. He once again was subjected to a major surgery wherein now a bone graft was harvested from his skull along with soft tissue cover by a flap raised from his forehead that was maintained for 3 weeks prior to its detachment and repositioning at the donor and recipient sites. Meeting with Dr. Ashok Gupta during a Plastic Surgical Conference at the Army Hospital Research and Referral Center helped the Plastic Surgery team treating jps get in touch with this eminent Plastic Surgeon of world fame.
Extensive and detailed study of his present problems and the highly specialized corrective surgeries to restore the lost muscles and the nerves of the face and thereafter to reconstitute the missing bones at the orbit, nose and the cheek region were designed at different stages for Mr. JPS to achieve a final acceptable aesthetic and functional result that will be satisfying to both, the patient as well as the surgeon.
Functioning muscle transfer is done on confirmation of the growth of axons up to distal end of cross face nerve grafts. Anterior one third of the Gracilis muscle supplied by a single fascicle, is harvested as a mini Gracilis flap. The recipient site is prepared and facial artery, anterior jugular vein and distal ends of cross face nerve grafts are identified, dissected and tagged for subsequent use. As the functional motor power of the transferred muscle is greatly influenced by muscle ischaemia, care is taken to complete all requisite steps at the recipient site, before dividing the vascular pedicle. Three trans-fixation sutures for fixation of the functioning free muscle are placed at the zygomatic prominence and passed through the muscular dermal tissue at naso-labial fold, upper lip, angle of mouth and lower lip, simulating actions of orbicularis oris and zygomaticus major muscles. 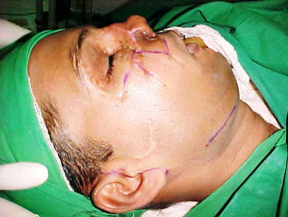 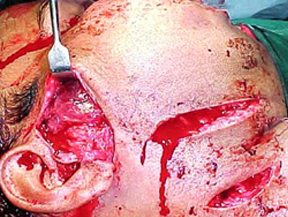